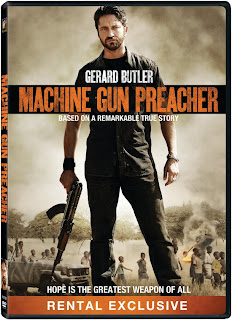 Sadly when I get notice of an upcoming movie, it often times hasn't been rated yet. This movie is rated R. For the most part we shy away from R movies. I really enjoy Gerard Butler and his acting and the message seemed to be one we would enjoy. Hubby loves the action packed shows and if that was what gave it an R I was ok with that. Unfortunately within the first 5 minutes of the show they said the F word more than a dozen times, giving it an instant Reject status in our home... bummer. I would have hoped a movie with the word preacher in it would have been a little less vulgar.

Disclosure: The reviews and or opinions on this blog are my own opinions. I received the above to review. No monitory compensation was received. I was not required to write a positive review. Your experience may differ. The opinions I have expressed are my own I am disclosing this in accordance with the Federal Trade Commissions 16 CFR Part 255: Guides Concerning the Use of Endorsement and Testimonials in Advertising.

Posted by Jubilee Reviews at 10:00 AM