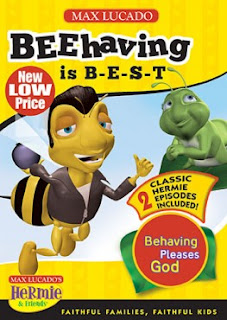 God's rules are the best rules to follow
Buzby the misbehaving Bee
Hermie gets a new neighbor, Buzby the busy bee, self proclaimed King of the Bees. Buzby looks and talks like Elvis.
The Garden has the 10 Garden Golden Rules that Hermie tells to Buzby. Buzby says "King don't like rules". "Rules aren't cool, I'm cool".
Buzby ends up breaking all of the Golden Rules!! #1 rule is Always listen to God.

Hermie and friends take their problems to God and He says he'll talk to Buzby. Buzby tries to ignore God's voice and continues to break the rules, taking young lady bugs Bailey and Hailey with him.
God makes the rules because he loves us! Will Buzby learn that after he breaks rule #6 Don't Open the Gate and lets an intruder into the garden!!??

This episode plus one more Buzby and the Grumblebees are geared to listening to the rules and not grumbling. Hermie is a classic! My entire family likes to sit and watch Hermie, even if it is geared toward ages 4-7.

How do you reward your kids for following the rules and doing the right thing?

Answer that question along with your email address in the comments for a chance to win your own copy of Behaving is Best!

USA only, ends June 28 at midnight