A Love Forbidden by Kathleen Morgan 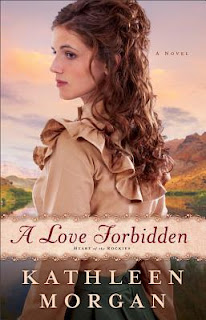 As a young girl of 12, Shiloh Wainwright befriends a Ute Indian named Jesse, a hired ranch hand. 17 year old Jesse is a 'half breed', part Ute, part White and is not treated very kindly among the white community apart from his friendship with Shiloh.

False accusations come against Jesse and he is punished unfairly, whipped and beaten. Shiloh intervenes just shy of Jesse's death. Jesse gathers himself and leaves, never returns but is always near Shiloh's heart.

9 years later, educated Shiloh heads out to an Indian Reservation to teach the Ute Indian children. Relations have been tense between the Utes and US Gov Agency located in the Colorado Rocky's where Shiloh is to teach. The Utes are not allowing their children to be taught the 'white' ways, though the Agency and Shiloh believe it is a way to preserve the Ute Nation by giving them the ability to read and write. Shiloh's job is to convince the different tribes represented to allow their children to be taught under her.

Rivalry continues in other ways as the Agency and Ute tribes differ in lifestyle and the way they want to live. the Gov continues to infringe on the land and the Utes rights, causing a great deal of tension.
In the middle of that tension is Jesse, now living among his Ute relations and rejecting the White that streams through his blood.

Racial injustices and differences have been a theme for the world since the early Bible times, which must greatly sadden the Creators heart. In this novel we see the injustice by the early Indian reservations and the fight between the whites and Ute. Shiloh and Jesse caught in the middle. A love forbidden, and not acknowledged for fear between Shiloh and Jesse. I love how Kathleen Morgan shows a realistic, historical background in this 1800's setting. The characters where well developed and often the book read as if I was watching a movie with a similar plot, just lost in the adventure and the hope of reconciliation. Sometimes you want to root for Jesse, others you want to kick him! Shiloh is the heroine throughout and she has such a great fire and red headed nature about her, the only kind that would survive this environment.
A book about forgiveness and God making a way!

I received a copy of this book from Revell in exchange for an honest review. It is available at your local Christian bookstore.

Posted by Jubilee Reviews at 8:38 AM