Letter from a Martyred Christian by HL Hussmann 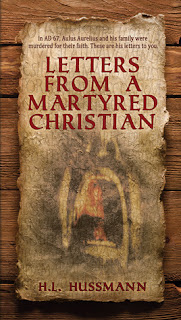 In A.D. 67 Aulus Aurelius was convicted of treason against the Emperor by being a member of the 'cult of Christus". Unwilling to renounce his faith in the creator God, Aulus watched as first his daughter then his wife were killed by the Roman soldiers for their faith. He too was martyred into the arms of Christ. Once in Heaven Aulus watches those on earth and writes letters from Heaven to the modern day church in hopes of encouraging their faith.


The world we live in is nor our home, just a brief stop on our way to eternity. Aulus describes how minuscule we truly are in the realm of Gods creation. Only that done for Christ will last and only those who accept him will walk the streets of Heaven.


Fictional of course as Aulus describes Heaven and all he sees there. The wisdom though that comes biblically is real. Aulus brings a new perspective on your life on earth as temporal, rejoicing in what he sees and learns in Heaven. He encourages your paradigm change to focus on the biblical, the truth, the eternal rather than just what is fleeting before your eyes.


You can use this book as daily thoughts, devotions, snippets of reading as it is broken down into 14 letters. To fully reflect I don't feel it is meant to be read straight through, but letter by letter with time in-between for pondering, prayer and reflection.


You can read more about H.L. Hussmann's ministry at http://www.hlhussmann.com

I received a copy of this book from Book Crash in exchange for an honest review.

Posted by Jubilee Reviews at 8:32 AM