TWENTIETH CENTURY FOX HOME ENTERTAINMENT AND
RELATIVITY MEDIA SALUTE U.S. SERVICE MEMBERS AND THEIR
FAMILIES WITH AN ‘ACT OF VALOR’ 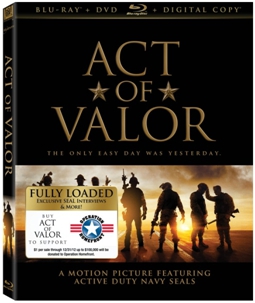 Portion of the Proceeds from the ACT OF VALOR Blu-ray and DVD to Benefit Operation Homefront
Twentieth Century Fox Home Entertainment in cooperation with Relativity Media and The Bandito Brothers pledged today to give a portion of the proceeds from the ACT OF VALOR Blu-ray and DVD to Operation Homefront. Operation Homefront is a national non-profit organization that provides emergency financial and other assistance to the families of our service members and wounded warriors. ACT OF VALOR will be available on Blu-ray Combo Pack and DVD everywhere June 5th.
“ACT OF VALOR is a great film depicting the tremendous skill, dedication, and professionalism of our men and women in uniform,” said Jim Knotts, President and CEO of Operation Homefront.  “The filmmakers should be commended for giving Americans a realistic look at the Navy SEALs.  We’re grateful that they are saluting these heroes with their support of our efforts to assist military families and wounded warriors.”
“Our main objective in making ACT OF VALOR was to honor the community, brotherhood and family sacrifice of our men and women in uniform. We can’t think of a better way to continue doing that than by partnering with Operation Homefront, which is a truly admirable organization that directly supports the service members and families of those that put their life on the line for us every day,” said co-directors Mike “Mouse” McCoy and Scott Waugh.
An unprecedented blend of real-life heroism and original filmmaking, ACT OF VALOR stars a group of active-duty U.S. Navy SEALs, alongside actors Roselyn Sanchez, Alex Veadov, Jason Cottle and Nester Serrano, in a film like no other in Hollywood’s history. A fictionalized account of real life Navy SEAL operation, ACT OF VALOR features a riveting story that takes audiences on an adrenaline-fueled, edge-of-their-seat journey.
ACT OF VALOR combines stunning combat sequences, up-to-the-minute battlefield technology, and heart-pumping emotion for the ultimate action adventure film–showcasing the skills, training and tenacity of the greatest action heroes of them all: real Navy SEALs.
Produced and directed by former Baja 1000 champion Mike “Mouse” McCoy and former stuntman Scott Waugh, and written by Kurt Johnstad (300), the film opened #1 in America when it was theatrically-released by Relativity Media on February 24, 2012. The ACT OF VALOR Blu-ray and DVD arrive June 5th just in time for Father’s Day.
About Twentieth Century Fox Home Entertainment
Twentieth Century Fox Home Entertainment, LLC (TCFHE) is a recognized global industry leader and a subsidiary of Twentieth Century Fox Film Corporation, a News Corporation company. Representing 75 years of innovative and award-winning filmmaking from Twentieth Century Fox, TCFHE is the worldwide marketing, sales and distribution company for all Fox film and television programming, acquisitions and original productions on DVD, Blu-ray Disc Digital Copy, Video On Demand and Digital Download. The company also releases all products globally for MGM Home Entertainment. Each year TCFHE introduces hundreds of new and newly enhanced products, which it services to retail outlets from mass merchants and warehouse clubs to specialty stores and e-commerce throughout the world.
About Operation Homefront
Operation Homefront provides emergency financial and other assistance to the families of our service members and wounded warriors. A national nonprofit, Operation Homefront leads more than 4,500 volunteers with a national presence and has met more than 590,000 needs since 2002. A four-star rated charity by watchdog Charity Navigator, nationally, 94 percent of total revenue donated to Operation Homefront goes directly to support service members and their families. For more information about Operation Homefront, please visit www.OperationHomefront.net.
My hubby and oldest boys watched this movie, as I am not big into violence and war. They said there were a few violent scenes that they didn't care for, but overall the adventure kept them on the edge of their seat. The action scenes were wonderfully done, and the acts of valor were well depicted. Hubby thought that some of the language could have been cleaner, given it had an R rating, he still felt there were instances were certain language didn't need to be used. It is not a family friendly film, more for adults only. I typically don't support R films, but I knew that a film about the Navy Seals and their acts of Valor would be film that my husband would enjoy and get much from.
I received a copy of this movie in exchange for an honest review.

Posted by Jubilee Reviews at 2:27 PM