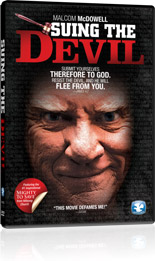 From Bridgestone
“Luke O'Brien, a washed-up salesman turned night law student, decides to sue Satan for $8 trillion. On the last day before Luke files a default judgment, Satan appears in the courtroom to defend himself with a legal team of ten of the country's best trial lawyers. Armed with Scripture and conviction, Luke fights an epic, spiritual battle against Satan (Malcolm McDowell), while the whole world watches the trial of the century play out on LegalTV.

Compelling performances heighten the power of this courtroom drama, which was awarded the Dove Foundation's highest honor of five doves. A high-concept, faith-based legal thriller, Suing the Devil also features the hit song “Mighty to Save” from Hillsong Music.”
http://www.gobmg.com/product/dvsd/
In this movie, Luke decides to sue Satan for all the troubles of the world, trying to bring his evilness into the light so that people recognize the bad things that Satan does and turn from him. The theme is a good one, the thought behind it is good, the use of scripture to back it up is good, but the story line was dry. I personally couldn’t get past the fact that God is the ultimate judge and that you need to follow Him and he will take care of Satan. God doesn’t ask us to take on Satan on our own like that. Nor do a human judge and jury decide whether Satan is guilty or not. A bit too far-fetched for me and it was a bit on the boring side. My older boys did note that it was a good message and they too understood the why behind it. Perhaps it would be a good movie for unbelievers to see how Satan can get so wrapped up in their life that they  don’t even realize the hold he has on them and their need for redemption in Christ.
I received a copy of this movie from Bridgestone in exchange for an honest review.

Posted by Jubilee Reviews at 5:53 PM