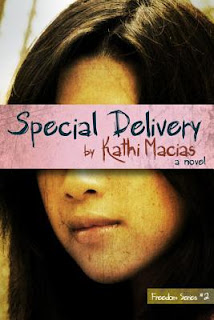 Kathi Macias again tackles the tough to realize topic of human trafficking, on US soil. I know I personally hadn’t given it much thought, how could something that horrific happen in the states, that is something that just happens in other countries. Not true!  Kathi continues her Freedom Series with Mara, who was rescued from a trafficking ring, now working as a waitress, trying to forget her past. God brings her former counselor Barbara back into her life just as Mara notices a possible victim who has come into the restaurant where she works.
Kathi weaves a number of stories together in the novel not only with Mara’s story, but with a young girl in Taiwan who is sold into slavery.
Kathi has a strong theme of being rescued, not only from the slavery but by the Almighty Father, the only one who can truly rescue us. The characters in the book are dynamic and ever growing. I loved the interaction between the characters in both the US setting and Taiwan. The Sacrifice that people made for each other, modeling Godly character verses the characters that continued to take and deceive, modeling the evil one of this world.
Intricately woven, yet never losing site of the horror of this crime that is hidden in the shadows. Kathi informs us of a very serious topic through these fictional characters, but makes them so real that it stirs in my heart to seek out to help those involved in the real life bondage. May God Bless her as she seeks to bring light into a dark place.
Not a light, easy read. Serious in nature and thought provoking as it should be! Excellent work. I had not read the first one in the series and it wasn’t necessary to get fully out of this second novel. I will however be picking up the first to read!
I received a copy of this book from Pump up your Book in exchange for an honest review.

Posted by Jubilee Reviews at 12:11 PM