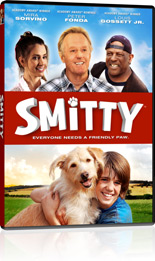 About the Movie
Peter Fonda, Mira Sorvino, and Louis Gossett, Jr. head an all-star cast in this coming-of-age family movie. Smitty tells the story of 13-year-old Ben Barrett (Brandon Tyler Russell), whose mischievous antics have become more than his struggling single mom (Sorvino) can handle. After Ben is caught vandalizing a restaurant, he is sent to Iowa to spend the summer on a farm with his tough grandfather, Jack (Fonda), who may be able to curb his grandson's troublemaking tendencies. As soon as Ben arrives, however, he gets ready to run, sensing hard work that definitely was not part of his summer plans.

To give Ben a companion, Jack takes him to the local animal shelter, where Ben meets Dog, a lovable mutt that was left behind by his owners. Between the dog and a friendly neighbor (Gossett, Jr.), Ben soon learns life lessons about friendship, family, and responsibility.

My thoughts:
This movie was pretty deep for young ones. Ben was struggling with moving around a lot and trying to fit in. His mother worked 2 jobs and was going to school. He never met his father. Tough spot for a kid to be in. He hooks up with the wrong crowd, gets caught (the crowd doesn't) and his choice is move to the farm in Iowa for the summer of Juvie for 6 years. His Mother and Grandfather haven't spoken in 13 years, making the hand off a bit awkward.
Issues like pregnancy out of wedlock, bullies, lack of respect, made this movie hard for my children under 13 of years old. Even the older ones didn't really care for it. It was just a little too deep.
The mom was dating a guy Russell and they show them kissing which didn't seem appropriate since they had just met. My 16 year old says "that is what got her in trouble 13 years ago".. thought that was kind of interesting that he picked up on it. This movie is not put out by Bridgestone but Phase 4 Films. It does have a Family Approved Seal on it as there is no cursing or major violence. There is some reference to God in the film so that is good. Funny that the Grandfather references it first, despite his bitterness toward his daughter.
Not my favorite film, only gets 3 stars from our family

Posted by Jubilee Reviews at 5:02 PM