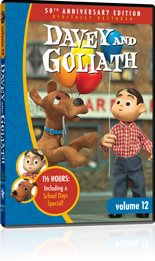 This classic animation television series aired from 1960-1975, and now is on DVD for the next generation of children!
Produced by the ‘Gumby’ creators, we are flashed back to the early years of clay animation. Though Davey and Goliath may not be as detailed and flashy as animation today, the message of God is still long lasting. My 4 year old enjoyed the stories very much and didn’t seem fazed at all that it wasn’t done in all computer graphics.
This 1 ½ hour DVD has 5 episodes including a lost episode called The Watchdogs.
I love the innocence and family friendliness of Davey and Goliath as young Davey seeks to teach others about the Word of God.
From Bridgestone’s website:
Complete your Davey and Goliath collection with the final volume of the 50th anniversary re-mastered release. Volume 12 features five entertaining episodes, including the 1971 School Days special "School...Who Needs It?" On the first day of school, Davey and the Jickets' clubhouse protest in front of the school with signs that say "Down with School" and "I Hate School." Through the efforts of an understanding teacher, the enthusiasm of a new student, and an accidental fire that almost destroys the class float, Davey finally realizes the valuable lessons he can learn in school.

Volume 12 also includes the previously lost episode "The Watchdogs," in which Davey witnesses a robbery but shies away from reporting it until Officer Dan and Mr. Hansen succeed in teaching him the real meaning of the golden rule. Then, "Come, Come to the Fair" depicts Davey's Sunday school class hosting a folk fair where the students learn how different cultures celebrate and remember Jesus. Other episodes in the series finale include "The Doghouse Dream House" and "The Good Back Luck," in which Goliath's cold prevents him from leading Davey and Jonathan back to safety after they become lost during a school field trip.

You can pick up your copy at Bridgestone http://www.gobmg.com/product/dvdag12/
I received a copy of this DVD in exchange for an honest review.

Posted by Jubilee Reviews at 2:58 PM