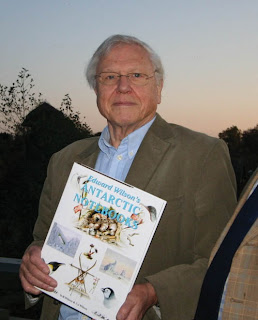 Published by Reardon Publishing, Cheltenham, at the end of October
2011, the ‘Edward Wilson’s Antarctic Notebooks’ was launched by Sir
David Attenborough at the Wildfowl and Wetlands Trust Centre (the last
visionary centre created by Sir Peter Scott, the son of Captain Robert
Falcon Scott) in Barnes, London. Sir David was particularly taken by
the sketch, in the book, that Uncle Ted drew of the Black Flag on Ski
left at the South Pole by the Norwegian Party led by Roald Amundsen,
stating it showed the true and amazing character of Edward Wilson that
he could calmly draw this flag even though the party would have been
disappointed at not reaching the South Pole first. Of course ‘Edward
Wilson’s Antarctic Notebooks’ was the follow up book to my brother
David and my book ‘Edward Wilson’s Nature Notebooks’ also published by
Reardon Publishers, back in 2004. The idea of the ‘Edward Wilson’s
Nature Notebooks’ had come about because so many already knew of Edward
Wilson of the Antarctic, but few actually knew that he was one of the
world’s most outstanding scientist’s and leading wildlife painter’s of
that era from his work in Europe and whose gifts and talent were at the
forefront of changes taking place in the early twentieth century
Science and Art communities. When the ‘Edward Wilson’s Nature
Notebooks’ were published in 2004, not only did David and I get
numerous requests in relation to lecturing on this role model of the
Antarctic Heroic Age, but also questions as to when we were going to
produce an ‘Edward Wilson’s Antarctic Notebooks’. And so the idea of
the second book materialised. Meanwhile I was working away at the
Wexford Wildfowl Reserve, Ireland’s premier wildfowl reserve and the
home of the Greenland White-fronted Goose, that species first described
by Sir Peter Scott, founder of the Wildfowl and Wetlands Trust, and as
mentioned the son of Captain Robert F. Scott. In 2000 I spent a year
working for the National Parks in South Australia, (where I had great
fun setting up bird count areas and butterfly monitoring walk amongst
many other projects), and on my return I was contracted to ‘Lecture’
and be the ‘On-board Ornithologist’ on one of the cruise ships in
Antarctica (this continued for the next eight annual summer seasons).
What better place ‘to concentrate the mind’ on ones famous relation,
whose outstand contribution to Antarctic Science and Art were so well
known from his Antarctic Expeditions 100 years before. There was the
added advantage that my brother David was on-board Historian so we were
both able to share our passions and instigate our research into these
‘very special’ book(s). Both David and I spent huge amounts of time
researching, discussing and choosing what had to go into both the
‘Edward Wilson’s Nature Notebooks’ and ‘Edward Wilson’s Antarctic
Notebooks’. Quite often each of our own favorites came into play and
many painful decisions had to be made. As requirements for pages were
selected, these were forwarded to Nicholas, our highly patient
publisher, who designed the pages only to then find that both David and
I preferred them this, that, or yet another way. Bit by bit these books
came together – new pictures were discovered, and included, or maybe
just noted as to where and in whose collection they might be. It
worked, and in 2004 David’s and my dream became a reality with the
publication of ‘Edward Wilson’s Nature Notebooks’. At last, real
publicity for one of the most outstanding and important 20th Century
Artist, Naturalist and Scientist, quite apart from his contribution to
Antarctic Exploration, was out in the public domain. This, the first of
our Uncle Ted book series, was followed in 2011 by the ‘Edward
Wilson’s Antarctic Notebooks’. Even Her Majesty Queen Elizabeth II
kindly arranged for two of her images to be made available to us for
use in the second book.
Both the ‘Edward Wilson’s Nature Notebooks’ and ‘The Edward Wilson’s
Antarctic Notebooks’ were labour’s of love, each being written with
particular charities in mind. All the profits from the ‘Edward
Wilson’s Nature Notebooks’ were assigned to ‘Edward Wilson memorial
projects’, and this book has and is selling well, and is currently
providing useful funds for these memorial projects. The ‘Special’
edition of that book, was selected as the ‘Henry Southeran Limited Fine
Books and Prints, of London, ‘The Book of 2004’’, which was
particularly satisfying. As to the ‘Edward Wilson’s Antarctic
Notebooks’, all the profits are going to ‘Edward Wilson Funds at the
Scott Polar Research Institute’. Book sales are most encouraging and
sales are progressing at a good pace and it is hoped that before long
this books will also be providing the selected Edward Wilson Funds with
much needed money to further those Edward Wilson younger generation
science and art projects.
‘Edward Wilson’s Nature Notebooks’ and ‘Edward Wilson’s Antarctic
Notebooks’ are available in good bookshops or at:
http://www.antarcticbookshop.com/, www.edwardawilson.com/ or
http://www.wildside.ie/.
Christopher J Wilson FZS
Posted by Jubilee Reviews at 9:00 AM