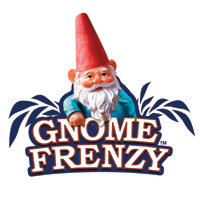 You have seen them around, those gnomes made popular again by Gnomeo and Juliet the movie. Travelocity and even The Amazing Race utilize the gnome in their publicity.
Where did we get the idea of Gnomes anyhow? Gnome Frenzy on their site tells us

Gnomes are considered to be a part of the collective memory of Eastern and Western European folk tale. The Brothers Grimm featured gnomes in 'The Gnome', a series of short stories detailing the lives of gnomes. These stories depict gnomes in benevolent and malevolent lights, but the first one is perhaps the most important: in it clothing is given to two helpful gnomes and they decide to serve a cobbler and his wife for the rest of their days. Other stories exist of gnomes’ helpfulness in the oral tradition and relate the willingness of gnomes to assist in gardens. Phillip Griebel began manufacturing terra cotta gnomes specifically for gardens in the town of Graefenroda , Germany in the early nineteen century. They quickly became staples of gardens across the continent and were brought to England by Sir Charles Isham in 1847(2). One of the surviving gnomes from Isham’s garden is on display at the Isham estate and is insured for one million pounds sterling(3).”

I remember having a puzzle of gnomes as a kid, they have simply been around as long as I can remember. Now as an adult, with a move to a new town I thought it was time to have a Gnome grazing our front stoop!
I looked online for a company specializing in Gnomes and found Gnome Frenzy.
If you are looking for a Gnome of any kind, they are the place to find it!

The specialize in your favorite 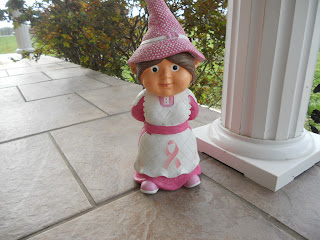 For $27.95 you can purchase this darling Gnome and Gnome Frenzy donates 15% to the National Breast Cancer Organization.

What a great reminder of a great cause! She is 11.5 inches tall and made of Resin. Great detailing, this gorgeous Gnome now graces my front porch! 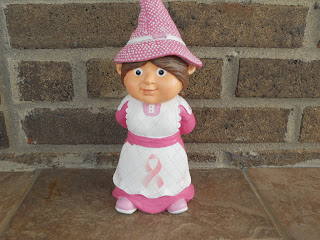 As you are getting your landscape all spruced up this spring, stop by www.gnomefrenzy.com and pick up a couple of these darlings!

I received a gnome in exchange for an honest review.

Posted by Jubilee Reviews at 1:26 PM