The Song of Unmaking by D. Barkely Briggs

The Song of Unmaking by D. Barkley Briggs 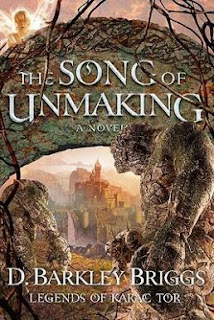 From the Website www.hiddenlands.net
In a frozen, bitter land, hope and fear collide.

The dreadful Goths have invaded Röckval, testing the strength of Bitterland's ruler. Meanwhile, the Barlow brothers are growing stronger and stronger in their powers—all except for Ewan, who traded his gift away to save the life of his friends.

Soon it becomes clear that the Goths are the least of their worries. A terrible machine is being built high atop Mount Vishgar, above Röckval, where the raging winds never cease. If the machine really does release the Song of Unmaking, what will happen? Can Arthur lay aside his grief and once more become a great leader of men? And what is the mysterious Doorless Tower, Nein Dyrr?

As Kr'Nunos grows more bold, the Barlow brothers take their stand with the viks of the north. Yet it is Ewan alone who must answer the question: Is any music stronger than the most powerful song of destruction the world has ever known?
My Review
Fantastic series for young adults, yet engrossing enough for adults as well. Mystical lands and far out of the way places make this a creative fantasy. Sometimes fantasties can be too ‘far out there’, almost ‘new age’ in nature. What I love about this series is that it still incorporated the vision of Christ and his characteristics. 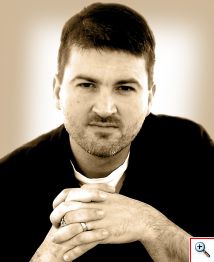 Dean Barkley Briggs is an author, father of eight, and prone to twisting his ankle playing basketball. He grew up reading J.R.R. Tolkien, C.S. Lews, Patricia McKillip, Guy Gavriel Kay, Stephen R. Donaldson, Ursila K. Leguin, Susan Cooper, Madeline L'Engle, Terry Brooks, Andre Norton and Lloyd Alexander (just to name a few)...and generally thinks most fantasy fiction pales in comparison. (Yes, he dabbled in  sci-fi, too. Most notably Bradbury, Burroughs and Heinlein).
After losing his wife of 16 years, Briggs decided to tell a tale his four sons could relate to in their own journey through loss. Thus was born The Legends of Karac Tor, a sweeping adventure of four brothers who become enmeshed in the crisis of another world and aong the way, must find their courage, battle overwhelming odds, face their pain, and never quit searching for home.
In God's timing, beauty and joy arose in the real world, too. Briggs remarried a lovely redhead named Jeanie, who previously lost her husband in an auto accident. Together with her four children, their hands are quite full, and they spend each day grateful for their eight blessings.
The Book of Names is the first book in The Legends of Karac Tor.
Corus the Champion is the second. Both are in stores now!
The Song of Unmaking arrives Fall, 2011.
Briggs previously authored two medical thrillers, God Spot (1999) and The Most Important Little Boy in the World (2001)
I appreciate Glass Roads for providing me with a copy of this book in exchange for an honest review.
Posted by Jubilee Reviews at 3:46 PM