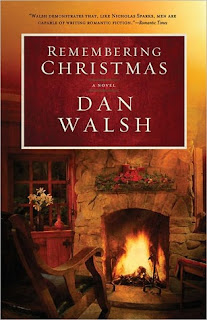 Remembering Christmas
Dan Walsh
Rick Denton, career minded, business oriented, climbing the ladder to success is thankful to have left his childhood home in Florida years ago. Rick's father left the family when Rick was very young, and Rick blames his mother for the loss. He hates it even more when his mother remarries his stepdad Art who tries to father Rick, when Rick still longs for his own father. Wanting no relationship with Art, Rick barely keeps in touch with his mother and stepfather.

Rick's Mother out of the blue calls Rick in panic mode, Art is hospitalized with a possible stroke, later learned to be an anuerism and she begs Rick to come and care for their christian bookstore during the busy holiday season when half of their income is earned. Thinking it will only be for a couple days Rick agrees to drive down and attempt to help in the tiny little bookstore in the basement of a church.
What was suppossed to only take days, lasted into weeks and Rick begins to relax a bit and reflect on his past, and what he believes he remembers.

Sometimes past memories aren't remembered as they truly happened, and I love how Dan Walsh uses Rick to reflect on past hurts and feelings and brings him full circle in his self examination. Throw in a love interest in the least suspecting person, forgiveness on the deepest levels, and twists and turns to keep the reader moving forward. A fantastic story for all times of the year, but relevant for Christmas as well!

Thanks to Revell for providing a copy of this book in exchange for an honest review.
Posted by Jubilee Reviews at 12:54 PM