Little Town of Bethlehem
A Documentary by director Jim Hanon 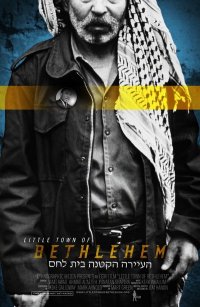 Sami, Ahmad, Yonatan come from radically different backgrounds in a land of unending war. Yet, against all odds, including some within their Israeli and Palestinian communities, they are able to find common ground. They walk a path of nonviolent struggle in lockstep with Martin Luther King and Mahatma Gandhi. For them courage is found not in taking up arms, but setting them down once and for all and extending a hand in peace.

From the award-winning team that brought you End of the Spear (2006) and Miss HIV (2007) comes director Jim Hanon’s latest documentary, Little Town of Bethlehem. Unscripted and unrehearsed, discover the humanity lurking behind an ancient cycle of violence.

I was given a dvd on discussions on nonviolence inspired by the film. Not the actual film, so my review is based on the 10 minute video alone.
Spinning of the nonviolent traits of Gandhi and Martin Luther King JR, the conflict between Israel and Palestine has shown that violence is the problem, not the solution. Though revenge and retaliation are part of our human nature, there is a growing movement between both the Israelis and the Palestinians for a non-violent, peaceful resolution.  Peace being that you do not feel threatened by your neighbor.
Featuring: Sami Awad, Ahmad Al’Azzeh, Yonatan Shapira. Music Produced by: Kirk Whalum. Film Design by: Mike Galloway and Mark Arnold. Produced by: Mart Green. Written, Directed and Filmed by: Jim Hanon. Feature running time: Approximately 77 minutes. This film is rated PG-13, Some material may be inappropriate for children under 13, for some violent and disturbing images.
http://littletownofbethlehem.org/