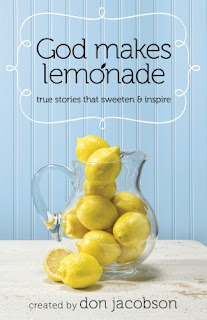 True Stories of hope amidst dire situations
Stories as serious as cancer, kidney disease and other health scares to those less life threatening like job loss or relationship problems.
Each story contributed by regular folks like you and I and compiled into a refreshing collection of hope and inspiration.
A great collection that continues to point us to the Creator, the one who will never leave us or forsake us.

Great compilation of stories, encouraging and beneficial for lifting up.

I received a copy of this book from Glass Road in exchange for an honest review.

Don Jacobson's twenty-five years in publishing included serving as the president and owner of Multnomah Publishers, where he oversaw the production of more than 1000 titles, including the five-million-plus-selling series Stories for the Heart. He's had the pleasure of working with such best-selling authors as Randy Alcorn, Joni Eareckson Tada, Henry Blackaby, Robin Jones Gunn, Karen Kingsbury, Andy Stanley, and Bruce Wilkinson. Don's wife, Brenda, has been mentoring mothers for more than a decade.
Posted by Jubilee Reviews at 1:00 AM

Email ThisBlogThis!Share to TwitterShare to FacebookShare to Pinterest
Labels: christian