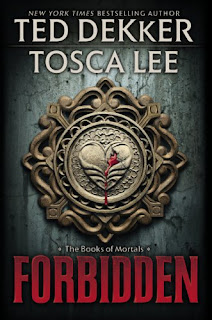 Forbidden
Ted Dekker
Published by Center Street
Source: Review copy
Available Sept 13, 2011
About the Book from Teddekker.com
“Circle fans, get ready, the wait is over. No, this isn’t a continuation. But Forbidden: The Books of Mortals rocks with same level of intensity and brilliance as the Circle Series. Riveting, resounding, and a magnificent blend of Dekker’s and Lee’s styles. I devoured Forbidden.” – James L. Rubart, bestselling author

“True-blue Dekker, with mammoth twists and head-pounding turns that will have readers debating the roles of emotion and logic that drive human existence. - Publisher’s Weekly


The Books of Mortals. Three novels. Two authors. One last chance for humanity.

Many years have passed since civilization’s brush with apocalypse. The world’s greatest threats have all been silenced. There is no anger, no hatred, no war. There is only perfect peace… and fear.

But a terrible secret has been closely guarded for centuries: every single soul walking the earth, though in appearance totally normal, is actually dead, long ago genetically stripped of true humanity.

Fleeing pursuit, with only moments to live, a young man named Rom stumbles into possession of a vial of blood and a cryptic vellum. When consumed, the blood will bring him back to life; when decoded, the message will lead him on a perilous journey that will require him to abandon everything he has ever known and awaken humanity to the transforming power of true life and love.

But the blood will also resurrect hatred, ambition and greed at terrible risk.

Set in a terrifying, medieval future, where grim pageantry masks death, this tale of passionate love and dark desires from master storytellers Ted Dekker and Tosca Lee peels back the layers of the heart for all who dare take the journey.


My Review
I have a guest reviewer for Forbidden. My son Dakota is a huge Ted Dekker fan, having read many of his books including the Circle Series and recently Blink. When I saw that Mr. Dekker had a new book coming out I knew Dakota would be able to provide my readers with a fantastic review!
Dakota’s Review
Ted Dekker has brilliantly written this book as a “good vs. evil” book . Where the main character Rom has to learn how to cope with his new life. He not only

learns true love, but also true sorrow as he weeps for some of the people he loves most. Meanwhile Saric has consumed an altered version of the blood that only brings out the worst of emotions; hatred, jealousy, envy, anger. So that he can rule the world.
There are a few parts where the action gets a little gory especially in fights. Though not any worse than any of the rest of Ted Dekker’s books. Altogether this book has lots of action, surprising twists, and suspense that will keep you interested. Reading this series could more of a challenge to read because the second book is released in 2012, and the third in 2013. But most of Ted Dekker’s books are worth the wait.

Posted by Jubilee Reviews at 11:24 AM