Echoes of Savanna by Lucinda Moebius 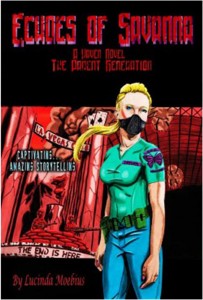 ﻿
Echoes of Savanna
A Haven Novel The Parent Generation
By Lucinda Moebius
Echoes of Savanna begins in the year 2036 during an outbreak of what appears to be small pox on a Navajo Indian Reservation. Dr. Savanna Taylor a 19 year old doctor specializing in genetics responds to the call that is just the beginning of a slew of plagues, viruses and diseases unleashed on the USA by terrorists.  A leading doctor in the field Savanna researches and tries to develop vaccines for the virus’s that are slightly mutated, unresponsive to the current vaccines.
Her father’s call to return to the safe, superior community he has created called Haven, has Savanna along with her young daughter Raven returning to the sanctity of Haven. Savanna soon becomes in-charge of the operations in Haven, a growing community detached from the rest of the world.
Savanna’s attention when not focused on Haven is in the lab with friend Emily on working with embryos to make them ‘perfect’ for implant. In a world where fewer are able to conceive Emily is determined to provide healthy babies for those outside of Haven, despite Savanna’s concerns.
Attempting to balance the running of Haven, her children, and her love Travis, and her research, her family outside of Haven,  Savanna has to make some hard decisions that will impact her forever.
My Thoughts
The first few chapters of the book focus on Savanna working with the Navajo on their reservoir, helping them with their epidemic. I love her relationship that grows with Chief Etu and the details of the culture and the research that she is doing. How she helped Kai and took her embryo to later implant and become Savanna’s daughter Raven.
I loved the character development of the key characters as well as secondary ones. They were well developed and relational. You could almost see their facial expressions in some of the conversations they had with each other just from the wording used.
The details of the running of Haven and all that needed to be done to have a community were excellent and I could visualize how they could form their own little world apart from the destruction happening around them.  Felt cult like in the rule driven and socialistic running of it, but it appeared to work for most of them involved.. a much better option that being out in the war torn USA.
I struggled however with the timing of the story. The first few chapters covered a few days. By chapter five we are covering a few weeks of time passing. Chapter eight we move quickly through 6 months of pregnancy by the 3rd paragraph. And later we cover years at a time very quickly. I tended to get lost in how much time passed. I appreciate that the author was trying to cover a large block of time in a single book, however I would have enjoyed having it put into 2 or 3 books covering the same thing.
There were a lot of details, and some intriguing ideas that I think could have easily been put into a series in of itself rather than rushing through some things. I felt the relationship with Travis was rushed, they were practically dating on the drive to Haven though they had just met.
I needed the timing and the pace to be consistent. Other than that I thought it was a great book, very detailed again. I am not typically one to read futuristic or science fiction books, but this was just slightly in the future by 25 years and was interesting to me.

Thanks to Media guests for allowing me to be on this Book tour and to Lucinda Moebius for a job well done!
Posted by Jubilee Reviews at 9:21 AM